I Charge by the hour

Fiber RUSH, the least expensive of the two is a material made with brown paper twisted as a rope. Same paper used for supermarket paper bags

Real RUSH, Is made from cattails grass from near the sea

Please measure from the front left to right furthest distance than front to back for pricing.

HAND CANE
CONVERT TO PRESS CANE  TO LOOK ALIKE HAND CANE
Takes up to 3 Hrs work
(1-2 weeks or sooner wait time for the workload ahead of you.) Please note: Press cane material is a pre-woven material that is woven to factory perfection. Don't worry if the frame in the seat is cracked or broke along the holes in it. This process can also strengthen and hold it together better than the traditional Hand Caning.

Please measure from the front left to right furthest distance than front to back for pricing.


Text me a picture

Get your sagging uncomfortable seat back up like new better than before.

Chair seating Elastic webbing Materials can not be sold for the do it your selfers. Webbing is cut to custom fit according to the size of the frame  Special tools for assembly is required to get the desired tension. Please look into shipping if you are from out of the state of NC. federal EXPRESS shipping cost will be charged for return as well. Call 919-744-0051 for price. Barry Benitez Wickerwideweb.com

If you can not bring it. Mail it FedEx

Type of Restoration- -- ALL Materials included except special ordered

PLEASE NOTE: I do not have any supply of the resin PLASTIC material so if you have any plastic wicker that needs repairing, don't send me any pictures. Nor do I sell any repair material above.

Back in the '70s, my parents bought a 200-year-old house in the Hampton's in NY.
In a carriage garage that had a full coal bin for the potbelly stove, in order to keep her family warm in the home.
My Mom, Dee, found a magnificent Lincoln rocker buried in all kinds of furniture and junk, where coaches would be parked. Across the driveway was an old Haybarn including an exterior door on the second level that was used to load and unload the hay for horses.
Meanwhile, Dee had noticed that when she was in the town shopping, she saw a guy who did furniture stripping. She remembered that rocker in the garage and thought about removing all the ugly coats of paint off it. Being striped for a few days, she went to get the rocker when it was done. Thrilled that she found it is a Tigerwood Maple rocker with all its paint removed. Except A little disappointed, the Hand caning on the back and the seat did not survive the harsh chemicals of stripping and now needs to be replaced. Not to mention, she has to pay for the stripping, and now have a rocker that no one can sit in. She asked him if he knew anyone who can replace the material. Holding his chin with his hand, looking at the rocker, he had to come up with a solution being he knows no one who can repair it.
He looked around his workshop and found some material that he had received from a customer once. He tried to convince her that maybe she could use it to reweave the chair. Now Dee had a new challenge. She went to the local library and found a book on Hand caning. At first, it looked overwhelming to consider such a task, but she was determined to get this rocker usable, being she just spent money on stripping it and the nice guy who did the stripping gave her some material.
Turns out she found the patience and a knack to understanding the pattern to weave such an enormous job. She refinished the wood with varnish by hand and was very proud of her accomplishment.
Weeks later an old friend came over to visit to have tea. She noticed the beautiful rocker in the room and asked her where she got it. Dee told her the story of how it all went about, and then her friend said that she has an old chair with the same kind of seat, and has been broken for years. Dee’s friend asked if she could fix it for her and that she would pay her for it.
Dee grew the business starting in 1971 naming it *Dee’s Caning* and it’s been word of mouth ever since.
Name Changes: Dees' Caning
Dee's Caning & Wicker
Dee'sWicker.com
WickerWideWeb.com
HandCaning.com

Better yet, see us in person!

We love our customers, so feel free to call or text us to make an appointment.
I will try to accommodate you to your schedule

You will be sent GPS to your cell phone when you call. (Google maps)

Hours by appointment-Closed Friday and Sunday 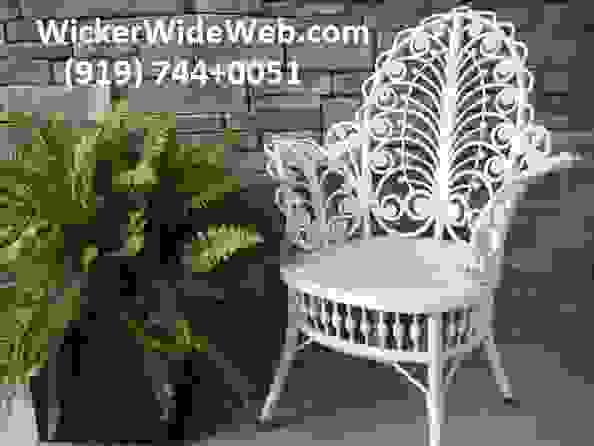